Ik Kil Cenote is undoubtedly one of the most beautiful cenotes in Mexico! It is also known to be one of the more popular cenotes in the Yucatán Peninsula so make sure you get there early in the morning or late in the afternoon to avoid the crowds!

I have put together this complete travel guide of Cenote Ik Kil including where it is, how to get there, how much it costs, and what to expect when you arrive.

Want cheap flights to Mexico? Check out CheapOair to book now and travel for less!

Have you got travel insurance for Mexico? We all know accidents can happen and having World Nomads Insurance will save you thousands of dollars if something goes wrong.

WHERE IS CENOTE IK KIL

Ik Kil Cenote is located in between the cities of Valladolid and Pisté in the Yucatan Peninsula, Mexico.

Click here to see the location on Google Maps.

From Valladolid, it’s approximately a 45-minute drive west to reach Cenote Ik Kil, and if you are heading east from Pisté, it’s a short 10-minute drive.

RELATED ARTICLE → 15 EPIC THINGS TO DO IN TULUM

HOW TO GET TO IK KIL CENOTE

If you have your own vehicle, getting to Cenote Ik Kil Mexico is very easy as it’s just off the main highway between Valladolid and Pisté.

There is a large parking lot at Ik Kil Cenote Mexico where you can safely park your car during your visit.

Yucatan Peninsula is said to be the safest place to drive in Mexico when it comes to getting behind the wheel, so it’s definitely an option to consider.

I always use Rentalcars.com to search and book car rentals in Mexico as they generally offer the best rates.

Alternatively, you have other options of taking a bus, hopping on a Collectivo, or grabbing a taxi to reach Cenote Ik Kil Mexico.

Taking a Collectivo to Ik Kil Cenote from Valladolid is quite simple and you can find them on Calle 39 about halfway down the street and also between Calle 44 and Calle 46. The cost is around 35 MXN and they will drop you right at the Ik Kil Cenote entrance. Collectivo’s depart at multiple times throughout the day whenever they are full.

If you prefer to take a bus to Cenote Ik Kil, you can head to the bus station in Valladolid which is located on the corner of Calle 46 and Calle 39, and jump on board the Oriente Bus. There are around 20 buses per day with the first one departing as early as 8:30 am. The Ik Kil Cenote entrance fee at the time of writing (January 2020) is 80 MXN for adults.

The facilities at Ik Kil Cenote resemble those of a public pool. There are many changing rooms, toilets and lockers available and you also have the possibility of renting a lifejacket if needed.

Outdoor showers are available and it’s mandatory to rinse off before going swimming in the cenote to rid yourself of any sunscreen or skin oils which helps to preserve the natural water inside.

If you forget to bring your towel, you’ll be able to rent one from the stand inside. Make sure to bring cash with you as they won’t accept credit cards.

You can make full use of the facilities that Cenote Ik Kil offers by relaxing in one of the many hammocks or sunbeds that are scattered around the whole area.

There are also two restaurants, one being a buffet, and small shops that sell ice cream and drinks. If you want to further maximize your time here at Ik Kil Cenote, why not spend a night at Ik Kil Hotel and have it entirely to yourself in the early hours of the morning before the tour buses arrive. WHAT TO EXPECT AT IK KIL CENOTE

Personally, I think what makes Ik Kil Cenote one of the best ones in Yucatán is that it resembles a fairy tale scene! Featuring leaves and vines hanging beautifully down from the top of Ik Kil Cenote and covering the walls until they reach the water.

Cenote Ik Kil itself forms an almost perfect circular shape and there is an internal concrete staircase making it very easy to access the inside. On the way down the steps, there are a couple of viewpoints worth stopping at to take photos.

Once you reach the bottom, simply set your belongings down in a dry area against the wall and jump on in for a swim.

I highly recommend swimming out to the middle of the natural pool, floating on your back, and marveling at the open-air circle above. I guarantee you will be in awe and it’s the perfect opportunity to simply take it all in.

The temperature of the water is quite fresh but once you get swimming around you will warm up in no time. There is also a wooden ladder built-in making it easy to get in and out of the Cenote. View of Ik Kil Cenote from above The way down to Ik Kil If you are up for a bit of an adrenaline rush, get your blood rushing by cliff jumping from the edge of the staircase into the natural pool. There are several jumping heights from about 3 meters and up to 5 meters along the staircase which is regulated by lifeguards at all times.

Ik Kil Cenote is 50 meters deep and the walls of the cenote are completely vertical which makes it a perfectly safe spot to cliff jump without having to worry about hitting anything on the way down.

Fun fact: A couple of Red Bull Cliff Diving events were held at Cenote Ik Kil in 2010 which is another reason that made this cenote so well-known and popular. But please, do not attempt to cliff dive from the top of Cenote Ik Kil Mexico, only from the staircase within the cenote itself is recommended.

Waterproof Shoes: Definitely consider purchasing a pair of waterproof shoes! It’s likely you’ll visit at least one waterfall or partake in some watersports during your travels and these comfortable, anti-slip, quick-dry shoes are perfect for all water activities. My visit to Ik Kil Cenote was one of the best adventures I had in the Yucatan Peninsula and I can’t recommend this place enough!

Its natural beauty and unique features are what make this cenote one of the best in the area and it’s for sure not to be missed on your Mexico itinerary!

Hot Tip → Remember to get there as early as possible when doors open at 9:00 am as it’s a much better experience without hoards of other tourists around during the day. Also, try to avoid visiting on a weekend because Ik Kil Cenote is a popular place for the locals to hang out too.

WHERE TO STAY IN VALLADOLID

Valladolid has hundreds of accommodations to choose from so I have narrowed it down to a few of the best places to stay in Valladolid to suit the needs of luxury travelers, budget backpackers, and everyone in between.

See the list of accommodations below that I personally recommend:

Mayan Majesty is one of the only 5-star hotels in Valladolid. Featuring a cave pool with a swim-up bar, beautiful gardens and it’s centrally located in the heart of town. Choose from a Deluxe King Room, Superior Queen Room or the King Suite each with a pool view, private bathroom, flat-screen TVs, dining table, terrace and air conditioning. A free continental breakfast is also served for all guests. Great for couples, a group of friends and families. 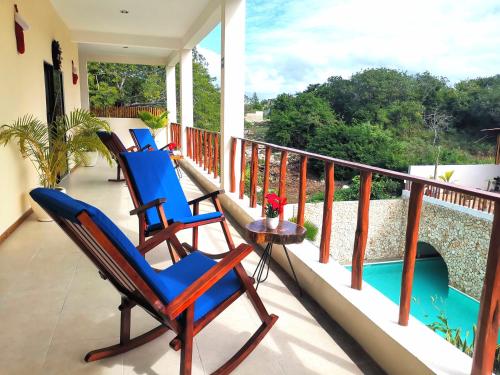 I personally stayed at Casa Del Mayordomo and can’t recommend this place enough! Located ight in the center of Valladolid and just walking distance to the main square, shops and markets. Featuring a central courtyard and swimming pool, shared dining area and a shared kitchen. The rooms are spacious with air conditioning, free wifi, private bathrooms, large comfortable beds and pool views. Free bicycle rental is also available at this hotel as well as a continental breakfast for all guests. Great place to stay for couples and friends. Hostal Tunich Naj is a favorite pick amongst backpackers and solo travelers with thousands of great reviews. Centrally located in the heart of Valladolid, this budget hostel is a simple yet effective accommodation featuring dorm rooms and private rooms with free wifi, shared kitchen, private and shared bathrooms, balcony terraces and coffee machines. There is also a tour desk at the hostel where you can organise and book day tours in Valladolid.

FOR ALL OTHER PLACES TO STAY IN VALLADOLID, SEARCH ON AGODA OR SEARCH ON BOOKING.COM

Want to travel full-time? ∼ Click Here To Learn How!

GETTING AROUND TO THE VALLADOLID CENOTES

There a number of ways of getting around to the Valladolid Cenotes, including Ik Kil Cenote, and they are by car, taxi or bicycle.

In saying that, I highly recommend renting a car in Valladolid to get around as taxis are very expensive and some Cenotes are too far away from the town go by bicycle.

Some other Cenotes in Valladolid that are definitely worth checking out are:

The best time to visit Valladolid is during the winter season from December to April. During this time there is little to no rainfall and the temperatures are just perfect.

The rainy season in Valladolid is typically between May and October which sees higher temperatures due to the humidity. The only plus side to visiting Valladolid during these months is there will be fewer tourists and prices are less inflated.

Earth-Pak Dry Bag: A dry bag is always a good item to have on your next trip! If you’re planning on going snorkeling, chilling at the beach, exploring waterfalls or island hopping, the Earth-Pak Dry Bag will keep your phone and valuables safe from water damage.

One of the best books to take on your trip is the Lonely Planet Mexico Travel Guide!

Another option for accommodation in Valladolid is to stay in an Airbnb, which generally has some great deals!

WANT TO SAVE $$$ ON AIRBNB? GET MY AIRBNB MONEY SAVING GUIDE

Do you want to travel full-time and get paid along the way?

Teaching English online is one of the easiest and most flexible jobs out there! Become a Digital Nomad, choose your own hours and work remotely from anywhere in the world by teaching English online. All you need is a laptop, good WiFi connection, a TEFL certificate and you’re good to go!

Click here to obtain your TEFL certificate with MyTefl

Join my Facebook Community and send me a message at any time for a quick response!

Before you go, don’t forget to check out My Online Shop!

I’ve got a wide range of digital products for sale and I’m sure you’ll find something that will come in handy during your travels! 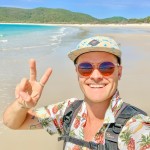 With a burning passion for travel and the outdoors, I launched this Adventure Travel Blog in 2017, and I’ve been exploring the world ever since!

My little corner of the interwebs is a space where I love to share all of my epic adventures, cultural experiences, and captivating photos from around the globe with the ultimate goal to inspire and motivate other like-minded travelers to explore this wonderful earth too!

You may also enjoy: Hi, thanks for visiting my blog!
I’m Jonny Melon – surfer, photographer, and coffee-lover from Australia. For the past 5 years, I’ve been seeking out epic adventures, cultural experiences, and unique locations around the world. I hope you find something here that inspires you to explore this wonderful earth too!
Read my story…